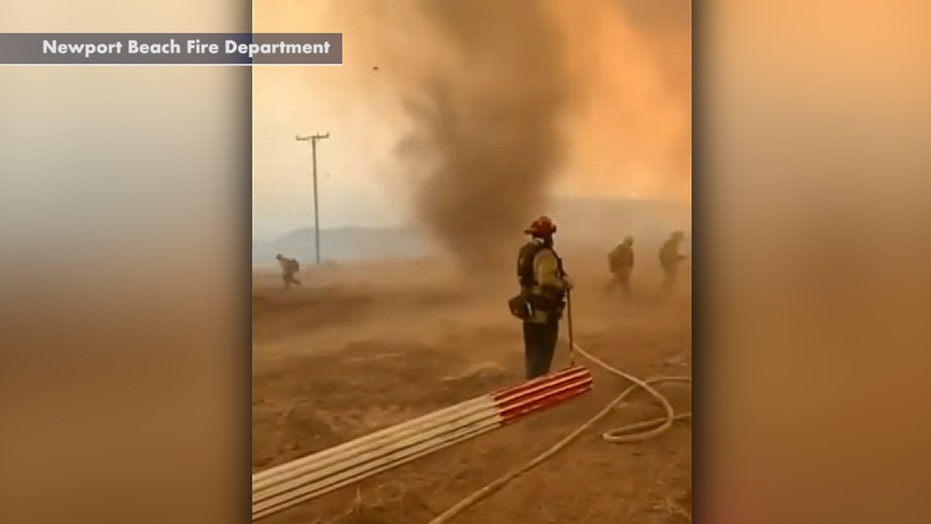 As firefighters battle numerous wildfires across California, gusty winds are threatening to fan the flames even further on Wednesday and even whip up some dust devils.

The National Weather Service has issued a red flag warning for most of the West Coast as strong winds will continue to bring "dangerous and life-threatening" fire weather conditions across the region.

"Fires that develop will likely spread rapidly and could exhibit dangerous fire behavior," the NWS said.

Firefighters on the front lines have been facing Diablo winds in the northern part of the state and Santa Ana winds in the south, whipping flames and causing evacuations to expand. 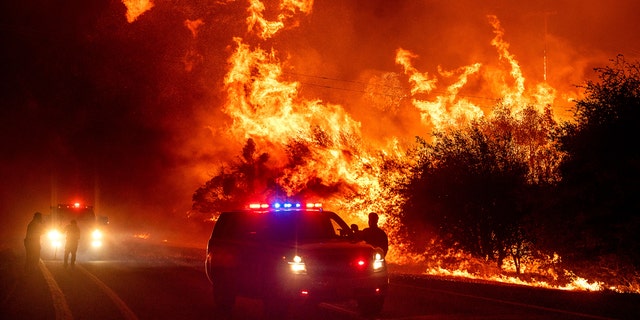 Flames lick above vehicles on Highway 162 as the Bear Fire burns in Oroville, Calif., on Wednesday, Sept. 9, 2020. (AP Photo/Noah Berger)

The El Dorado Fire in Yucaipa, which was sparked by an ill-fated gender-reveal party, has grown to 11,259 acres and is 19% contained.

Authorities told FOX11 two firefighters suffered injuries while fighting the blaze as new evacuations were ordered. Fire officials gave a glimpse on Tuesday into the condition firefighters are facing as they battle the blazes. 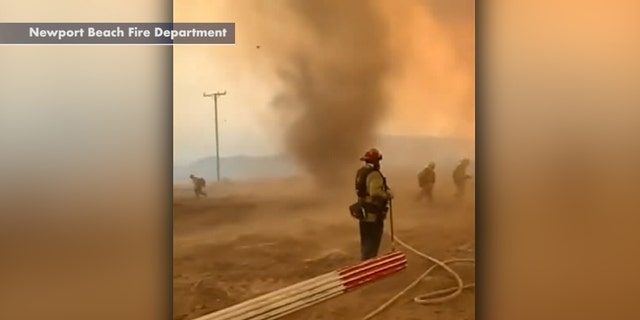 The Newport Beach Fire Department shared a video on Instagram of a rapidly spinning smoke dust devil as the blaze continues to rage. 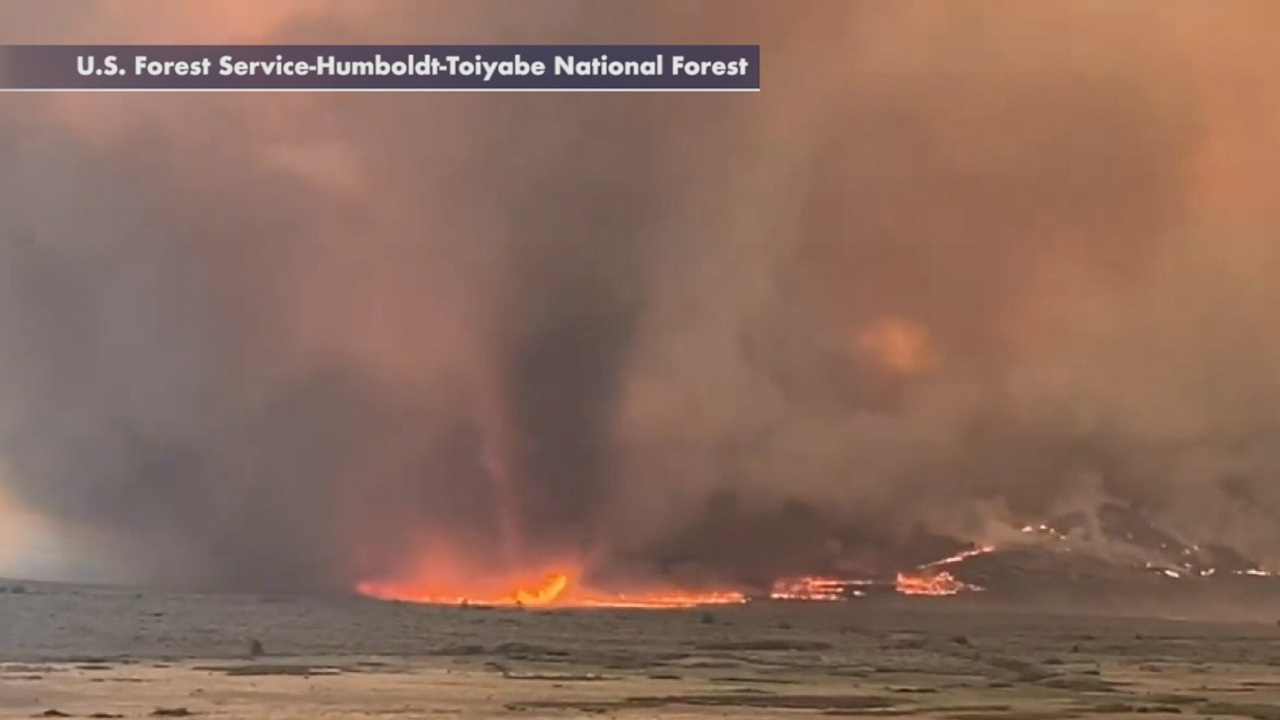 Dust devils are a small, "rapidly rotating wind" made visible by the dust, dirt or debris it picks up, according to the National Weather Service (NWS). They are typically harmless and weaker than tornadoes.

According to the American Meteorological Society, well-developed dust devils are occasionally strong enough to cause minor damage with an average height of around 650 feet, but a few have been observed as high as half-a-mile or more.

"Dust devils are best developed on a hot, calm afternoon with clear skies, in a dry region when intense surface heating causes a very steep lapse rate of temperature in the lowest 100m (328 feet) of the atmosphere," according to AMS. 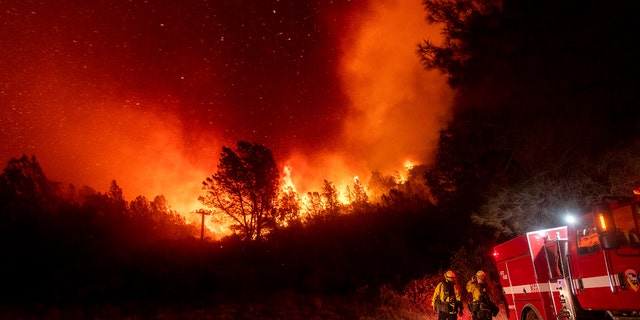 The U.S. Forest Service said Tuesday that 14 firefighters were forced to deploy emergency shelters as flames overtook them and destroyed the Nacimiento Station, a fire station in the Los Padres National Forest on the state’s central coast. 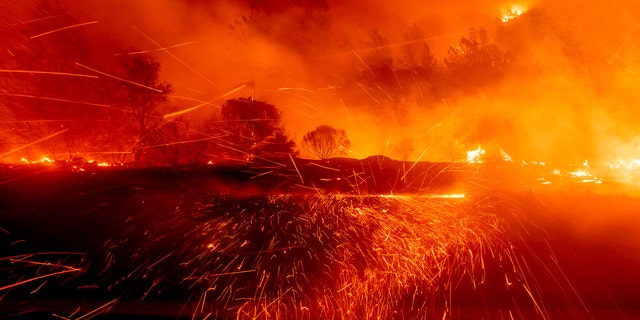 Embers fly across a roadway as the Bear Fire burns in Oroville, Calif., on Wednesday, Sept. 9, 2020. (AP Photo/Noah Berger)

The group suffered from burns and smoke inhalation, and three were flown to a hospital in Fresno, where one was in critical condition. 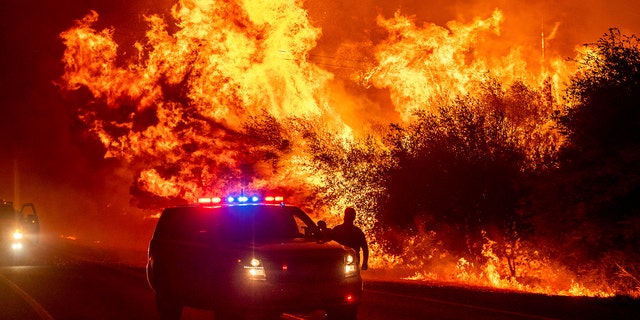 Flames lick above vehicles on Highway 162 as the Bear Fire burns in Oroville, Calif., on Wednesday, Sept. 9, 2020. (AP Photo/Noah Berger)

Nearly 2.3 million acres have burned in California so far in 2020, a new record surpassing one set just two years ago.

More than 14,000 firefighters are battling dozens of fires across the state. Two of the three largest blazes in state history are burning in the San Francisco Bay Area, but are now mostly contained.

In the past two days, helicopters were used to rescue hundreds of people stranded in the burning Sierra National Forest, where the explosive Creek Fire has destroyed 365 buildings, including at least 45 homes, and 5,000 structures were threatened, fire officials said.

In Southern California, fires burned in Los Angeles, San Bernardino and San Diego counties, and the forecast called for the arrival of the region’s notorious Santa Ana winds, which could reach 50 mph. 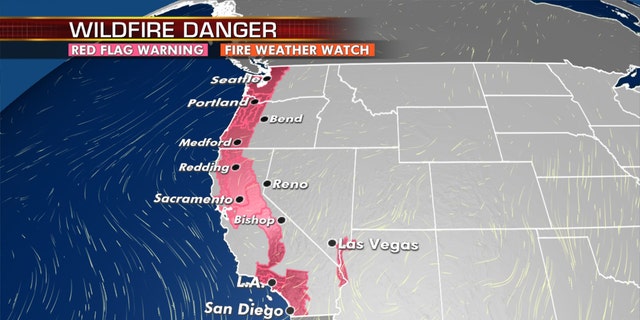 Evacuation warnings were issued Tuesday in foothill communities east of Los Angeles due to the Bobcat Fire in the Angeles National Forest, FOX11 reported.

With the return of Santa Ana winds, authorities said new fires are likely to start.

“What that means for the public is, we really need you to pay attention to any instructions on evacuations as the fire is likely to move south towards six communities," Steve Goldman with the US Forest Service told FOX11. "There’s a lot of people, a lot of property to the south of this fire right now."

The U.S. Forest Service on Monday decided to close all eight national forests in the southern half of the state and shutter campgrounds statewide. 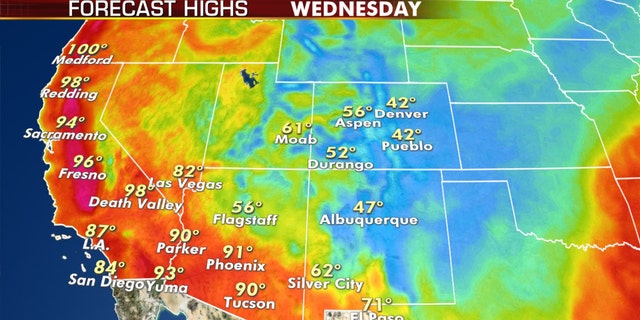 More heat and dry conditions are in the forecast of Wednesday along the West Coast. (Fox News)

The blazes come before California enters peak wildfire season in the fall.