The 75-year-old Buffalo, N.Y., man captured on video being knocked to the ground by police officers during a protest suffered a brain injury from the incident, his attorney said Thursday.

In a statement provided to various media outlets, Kelly Zarcone said her client, activist Martin Gugino, is beginning physical therapy to recover from the June 4 incident.

"As heartbreaking as it is, his brain is injured and he is well-aware of that now," Zarcone said, according to WNBC-TV. "He feels encouraged and uplifted by the outpouring of support which he has received from so many people all over the globe. It helps. He is looking forward to healing and determining what his 'new normal' might look like."

Calls and emails to Zarcone from Fox News were not returned. 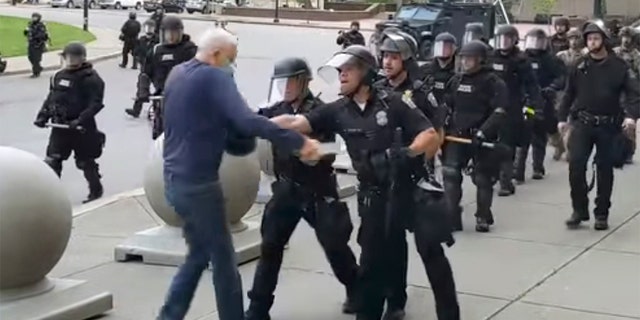 In this image from video provided by WBFO, a Buffalo police officer appears to shove a Martin Gugino who walked up to police. Video from WBFO shows the Gugino appearing to hit his head on the pavement, with blood leaking out as officers walk past to clear Niagara Square. Gugino's lawyer said Thursday that he suffered a brain injury. (Mike Desmond/WBFO via AP)

Two Buffalo police officers — Aaron Torgalski and Robert McCabe — have each been charged with second-degree assault after a video widely shared on social media captured Gugino approaching them during a protest over the death of George Floyd. The officers shoved him, causing Gugino to fall backward and hit his head.

In the video, a pool of blood could be seen beneath his head as Gugino was on his back in a motionless state.

President Trump weighed in on the matter days later when tweeted, without evidence, that Gugino was possibly an "ANTIFA provocateur." He cited a One America News Network (OANN) report for the unsubstantiated claim that drew widespread criticism.

In response to Trump, Gugino texted the USA Today Network on Tuesday, writing: "No comment other than Black lives matter. Just out of the ICU. Should recover eventually. Thx [sic].”

Friends of Gugino described him as a Catholic peace activist and not a member of Antifa, which is a collection of left-wing groups that use physical confrontation against opposing forces. They said Gugino has long advocated for the poor and disenfranchised.

The OANN report Trump cited was based on a post from the site Conservative Treehouse that said Gugino was an activist. But the report does not actually provide evidence that Gugino is associated with Antifa. It also claimed, without evidence, that Gugino was attempting to use a "police tracker" on his phone to scan police communications and apparently black them out.

In response to the charges against the two officers, all 57 officers of the Buffalo Police Emergency Response team resigned from the unit last week.

Berkeley bans tear gas, police use of pepper spray during demonstrations: The ‘era of militarism is over’

Berkeley bans tear gas, police use of pepper spray during demonstrations: The 'era of militarism is over'