Bruce Maxwell, MLB’s first player to kneel during the anthem, to sign with the Mets: reports

Bruce Maxwell, MLB's first player to kneel during the anthem, to sign with the Mets: reportscloseVideo

Maxwell was with the Oakland Athletics in 2017 when he decided to follow Colin Kaepernick’s mission to raise awareness about social injustice and police brutality and knelt during the anthem. According to multiple reports, the deal with the Mets will be finalized once he passes a physical and tests negative for the coronavirus.

EX-ATHLETICS CATCHER BRUCE MAXWELL: I WAS PUSHED OUT OF MLB FOR KNEELING

Maxwell, 29, played three seasons in the majors before he was demoted to the minors. He was released prior to the start of the 2019 season and was playing in Mexico before the Mets reportedly came calling. In the summer of 2018, Maxwell was sentenced to two years probation stemming from disorderly conduct during an incident with a food delivery driver. He was arrested at the time for felony aggravated assault with a deadly weapon.

The catcher spoke out against MLB’s response to the death of George Floyd. While other leagues released statements on the Black community, baseball, to some, was late to the gate. He also accused the league of failing to “back” him when he was kneeling during the anthem. 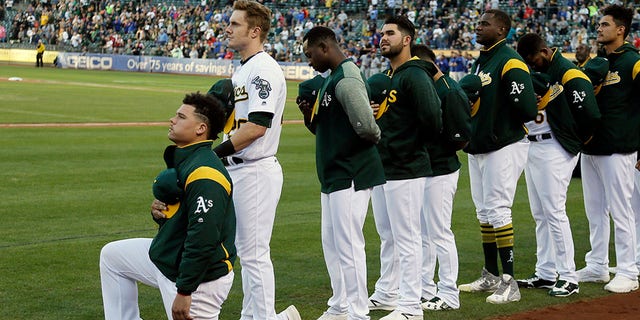 Maxwell was the first player to kneel in MLB. (AP)

"Knock me if you want, but I think MLB finally came out and said something because so many people were hounding them to say something," he said, according to the San Francisco Chronicle. "It doesn't shock me they were the last sport to say something. When I did my thing, my team supported me at the time, but MLB didn't really back me."

Earlier in July, he claimed he was pushed out of baseball for kneeling.

“I got pushed out of the game because I took a knee during the national anthem,” Maxwell told ESPN. “It eats at me. I find a way to still get my work done, but it still eats at me. Everyone talks about veteran leadership, but where were they? Chris Archer deflected every question. Didn’t even want to make the BLM video. No time for that dude. Andrew McCutchen? Where was everybody? How do you let a guy with one year of service time out-lead you?

“I didn’t do this for the clout. I did this because of what’s happening in this country and because we play in the whitest sport. We play in the most racist sport. There should be more of us out there.”

New York started Wilson Ramos at catcher on Monday night. He was 2-for-4 with a run scored.