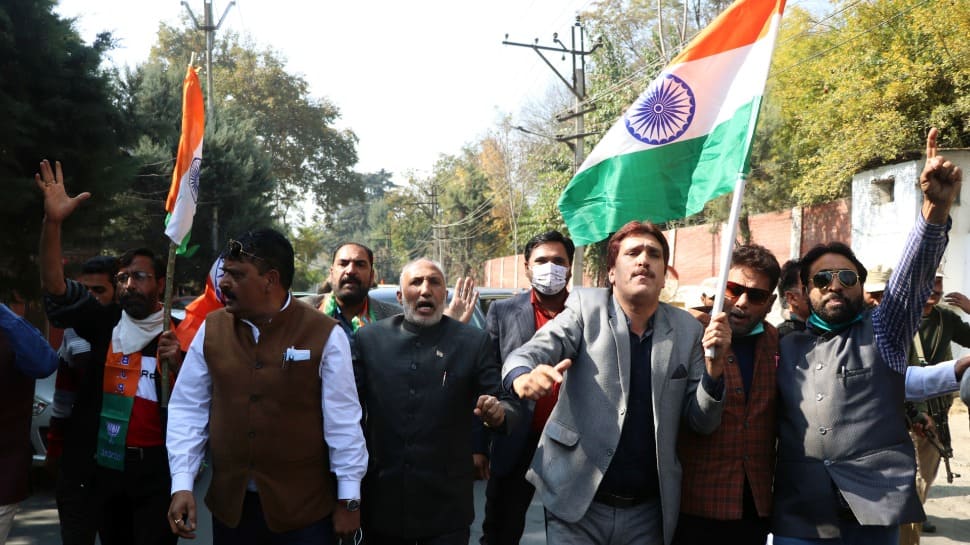 Srinagar: A 'Tiranga' rally was organised by the Bharatiya Janata Party's Kashmir wing to celebrate the Accession Day and to protest against the statement of ex-Jammu and Kashmir CM Mehbooba Mufti regarding not hoisting any flag.

Over 80-90 people participated in the rally that started from the Tagore Hall to SKICC via Gupkar Road where National Conference President Farooq Abdullah, Vice President Omar Abdullah and PDP Supremo Mehbooba Mufti have their residences.

This is to be noted that Mufti had earlier said in a press conference that she won't hoist any flag till erstwhile Jammu and Kashmir is given back.

Earlier in the day, some BJP leaders also tried to hoist the national flag at the Clock Tower in Lal Chowk, but couldn't as the Police permission was only given for the rally and not for holding any function.

The Instrument of Accession was executed by Maharaja Hari Singh, ruler of the princely state of Jammu and Kashmir, on October 26 in 1947. By executing this document under the provisions of the Indian Independence Act 1947, Maharaja Hari Singh agreed to accede to the Dominion of India.

With a little more than a week until Election Day, Trump and Biden make their closing pitches on ‘60 Minutes.’

With a little more than a week until Election Day, Trump and Biden make their closing pitches on ‘60 Minutes.’