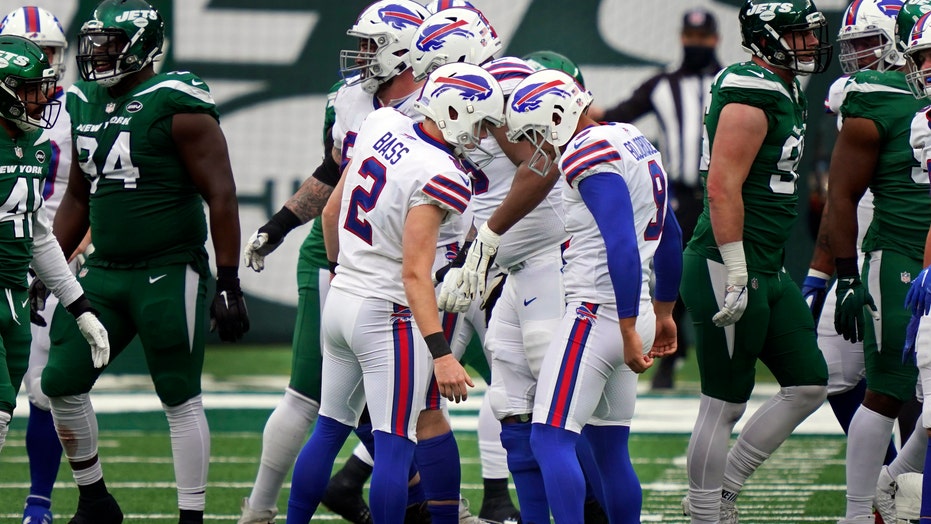 The end zone was elusive for Josh Allen and the Buffalo Bills.

So, they relied on Tyler Bass' busy leg — and the ineptitude of the winless New York Jets' offense — to pull out an 18-10 victory Sunday.

The Bills were held without a touchdown for the first time this season, but Bass tied a franchise record with six field goals to help Buffalo snap a two-game skid.

“We have to find ways to finish in the end zone,” Allen said. “It has to be better on my part. A couple penalties pushed us back and put us in a bad position. Shout-out to T-Bass for making those field goals and getting us the win.”

It was the third game in 13 days for the Bills (5-2), who lost to Tennessee and Kansas City before coming through against the league-worst Jets (0-7).

“It was rough today, but we got the W,” running back Devin Singletary said. “Just got to get back to the drawing board.”

The Bills fell behind 10-0 early and couldn't finish in the red zone, finishing 0 for 5 inside the 20. The victory was their first without getting a touchdown since they beat Washington 17-16 in 2007 on a safety and five field goals by Rian Lindell.

It was also the first time the Jets lost without giving up a touchdown since a 9-6 loss to the Rams in 2016, which was Jeff Fisher’s last win as an NFL head coach.

“In the end, he won us the game, along with our defense,” center Mitch Morse said. “It’s a tough deal to go out there and have to put up that many points with your leg.”

New York had a chance late after Micah Hyde was called for an unnecessary hit on Breshad Perriman, who appeared unconscious for a few moments and was being evaluated for a concussion after the game. The penalty put the ball at the Jets 32. But Sam Darnold was intercepted by Jerry Hughes on a tipped pass to seal it.

“We started seeing more plays and how they were trying to attack us,” safety Jordan Poyer said, “so we were able to settle down.”

New York coach Adam Gase said the team was looking for anything that might help it get a victory. So he handed off playcalling duties on offense to coordinator Dowell Loggains — and it seemed to give the Jets an early spark.

But it was back to the brutal struggles in the second half when they got just 4 total yards.

“They made some good adjustments,” Darnold said. “We just have to adjust to their adjustments. I have to throw accurate footballs. That’s it.”

Darnold, making his first start since missing two games with a sprained AC joint in his right shoulder, marched New York down the field before the drive stalled in the red zone. Sergio Castillo booted a 29-yard field goal — his first NFL kick in place of the injured Sam Ficken — to give the Jets a 3-0 lead.

The Jets’ second drive also stalled in the red zone, with La’Mical Perine getting stuffed for a 1-yard loss on fourth-and-1 from the Bills 18.

New York's defense came up with a big play on Buffalo's second possession. On third-and-goal from the 14, Tarell Basham sacked Allen and caused a fumble that John Franklin-Myers recovered. The Jets capitalized, with Perine reaching for the pylon on a 5-yard touchdown run that put New York up 10-0 midway through the second quarter — its largest lead of the season.

The drive was helped by pass interference calls on Tre'Davious White and Hyde.

Bass kicked a 53-yarder with 2:42 left before halftime to cut the Bills' deficit to 10-3. He added a 48-yarder as time expired in the opening half after Dane Jackson intercepted Darnold, who made a poor decision throwing into heavy coverage.

Andre Roberts returned the kickoff to start the second half 58 yards to get the Bills in good position, but they had to settle for Bass' 46-yarder to make it 10-9.

Buffalo took a 12-10 lead on Bass' 37-yarder late in the third quarter, but could have had more. Allen found Gabriel Davis open in the end zone for an apparent 22-yard touchdown, but it was wiped out by an illegal formation penalty.

Jets: Gase said DL Kyle Phillips will be out for the rest of the season after he was carted off the field early in the second quarter with an ankle injury.. … S Bradley McDougald left in the second half with a shoulder injury.

Cowboys’ Andy Dalton gets walloped as team loses to Washington