Behind the rogue and botched attack to kidnap Venezuela’s Maduro

Behind the rogue and botched attack to kidnap Venezuela's Maduroclose 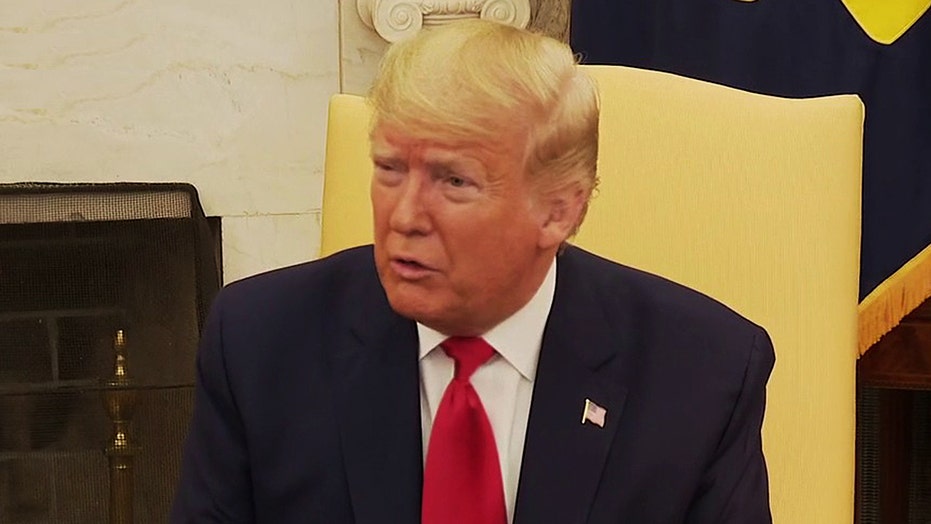 Trump: People of Venezuela being treated badly, they don't have water or food

In a triumphant speech Monday, embattled Venezuelan President Nicolás Maduro boasted that two U.S. citizens – in addition to more than 100 "terrorist mercenaries" – had been captured after an ultimately unsuccessful plot to kill him in Caracas a day earlier.

While President Trump insisted the U.S. government had nothing to do with the ill-fated operation, Maduro – who had a $15 million bounty put on his head by the U.S. Justice Department in March – waved two U.S. passports during the state television broadcast. He also displayed photos of alleged assailants sweeping in on fishing boats and claimed the Trump administration "is fully and completely involved in this defeated raid."

The two Americans were identified as Luke Denman and Airan Berry, both previously U.S. Special Forces soldiers, also known as Green Berets. However, another former Green Beret, Florida-based Jordan Goudreau, is saying he orchestrated the botched attack from Colombia. 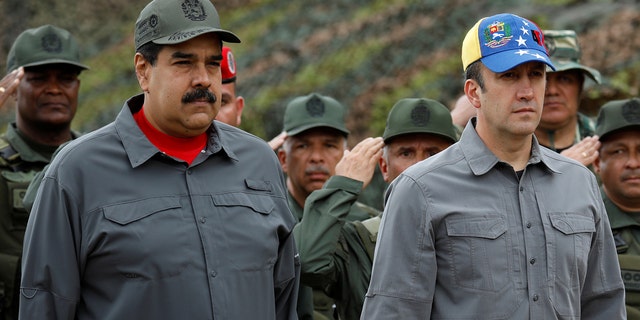 Goudreau declared in interviews Sunday that he served in Iraq and Afghanistan with Denman and Berry, before recruiting them to help kidnap Maduro in what was called "Operation Gideon."

While the United States and more than 100 other countries no longer recognize Maduro as the legitimate president of Venezuela – instead throwing their support behind opposition figure Juan Giuado – Maduro has maintained his position at the helm in the capital city of Caracas. He oversees the socialist regime and commands the security forces, even as the nation deteriorates into humanitarian crises.

Goudreau, who is believed to now be in Colombia, founded a private security company called Silvercorp USA in 2018 and claimed planning to overthrow Maduro started months ago. The three-time Bronze Star U.S. combat veteran told reporters in Miami that he initially signed a contract with Guaidó and two political advisers in October for $213 million.

He said although the U.S.-supported opposition leader never paid up, Goudreau continued with the operation, which included the two American soldiers and around 60 locals.

Guaido has since denied any involvement.

Ephraim Mattos is executive director of Venezuela and Colombia-centric aid organization Stronghold Rescue & Relief, which was not connected to Sunday's foiled mission. He said several of the disgruntled Venezuelan men involved were lured under the false pretenses, and were told Goudreau was "Trump's bodyguard, a Delta Force special operator, and a CIA agent." It was this "false trust" that sent the Venezuelans to their demise, said Mattos.

"It appears Guaido washed his hands of the plot many months ago in favor of allowing U.S. sanctions to run their course. And even though Goudreau clearly did not have the backing of Guaido, he went ahead with the plot anyway," Mattos continued.

A detailed Associated Press investigation published Friday also noted that Goudreau had been working with retired Venezuelan army general Clíver Alcalá. Alcalá turned himself in to U.S. officials in late March after being indicted on narcotics charges to train dozens of defectors from Venezuela's security forces, aimed at usurping Maduro. 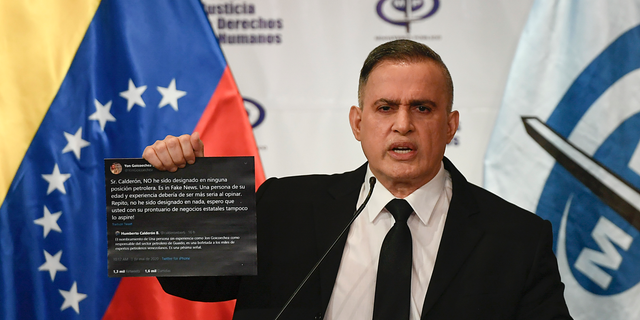 Venezuela's Attorney General Tarek William Saab holds up twitter posts during a press conference regarding what the government calls a failed attack over the weekend aimed at overthrowing President Nicolás Maduro in Caracas, Venezuela, May 4. The twitter posts are between two members of the opposition, Humberto Calderon and Yon Goicoechea. (AP Photo/Matias Delacroix)

Johan Obdola, president of the Canada-based Global Organization for Intelligence (IOSI) and a former counter-narcotics chief in Venezuela, said Goudreau met with people related to Guaido, including Alcala.

"Jordan, supported by Cliver Alcala, started providing special training to Venezuelan freedom fighters. This group of fighters was infiltrated by the Venezuelan regime, and when the U.S. offered a reward for the capture of Nicolas Maduro, it provided a better opportunity to plan this Operation Gideon, to capture Maduro, and initiate a national armed rebellion against the regime," Obdola said.

Nonetheless, there is still a lot that does not add up, Obdola contended.

"The way this operation looks is confusing. First, the initial location Macuto, a town located in near the biggest port of Venezuela, la Guaira, which is under heavy surveillance by the military forces," he said. "According to the regime, the 'mercenaries' have in their belongings, national I.D.s, dentist treatment receipts, and other items which does not make sense."

And despite the AP expose being published Friday, the ill-fated mission still went ahead on Sunday.

Multiple U.S. defense community sources indicated that word of the Maduro mission was rampant for months, and was not sanctioned by the Trump administration. 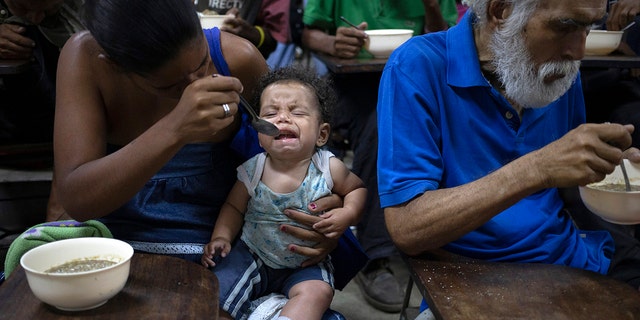 Zoraida Silva, 26, feeds her six month baby Jhon Angel, at a soup kitchen in The Cemetery slum, in Caracas, Venezuela. Silva said that she can not afford to have 3 meals a day, and she has been eating at the soup kitchen for two years ago. According to a survey recently published by the U.N. World Food Program, one of every three Venezuelans cope with food insecurity, unable to get enough food to meet their basic dietary needs. (AP Photo/Ariana Cubillos)

A source within Venezuela, requesting anonymity for safety concerns, told Fox News that Maduro's forces suddenly started sealing off Caracas more than a week ago and strengthening security around the capital, suggesting that the regime was well aware of the showdown.

"One thing Maduro's guys have mastered is intelligence," the source said. "Many people think this was a setup, with a Maduro agent involved. Some are questioning Guiado's involvement, but regardless, this will hurt him and demoralize the opposition."

The source also expressed concern that it will "give Maduro an excuse to extend the lockdown until June, citing national security."

A U.S. intelligence insider concurred on Tuesday that the "cowboy" quest likely was infiltrated by Maduro operatives weeks ago, but the Venezuelan regime waited to score a propaganda victory. It also put the U.S. government in the dilemma of needing to offer a concession to free the two U.S. men.

The Silvercorp website, much like its social media pages, features men in body armor and camouflage, and video of a muscled Goudreau running up mountains and hanging from helicopters.

"We provide governments and corporations with realistic and timely solutions to irregular problems," the site says. "Our elite staff bring unrivaled dedication for building a safer world while striving to uphold the highest standards of compliance, quality, and integrity."

Venezuela's Attorney General Tarek William Saab said in a statement Monday that in total 114 people were arrested for alleged involvement, and almost 100 more are sought. 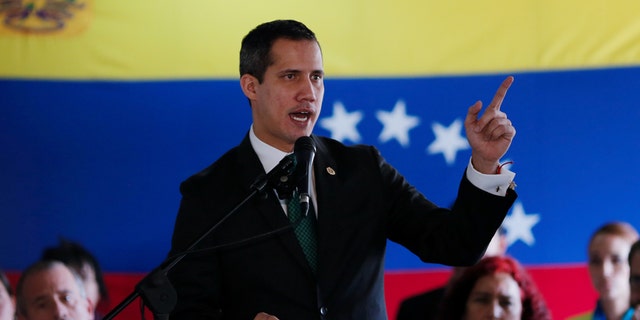 It remains unclear what steps the White House will take to free the American veterans now in Venezuelan custody.

"I've tried to engage everybody I know at every level," Goudreau told the AP on Monday about helping free his detained colleagues. "Nobody's returning my calls. It's a nightmare."

It's a nightmare, U.S. officials stressed, from which everyone wanted to distance themselves.

"The incident reminds us that a democratic transition in Venezuela is not going to happen in a single weekend and will not be led by outsiders, but rather as part of a longer process of negotiations involving all Venezuelans and reinforced by the international community," added Keith Mines, senior advisor on Colombia and Venezuela at the United States Institute for Peace. "The U.S. is supportive of efforts to restore democracy to Venezuela through a negotiated outcome."