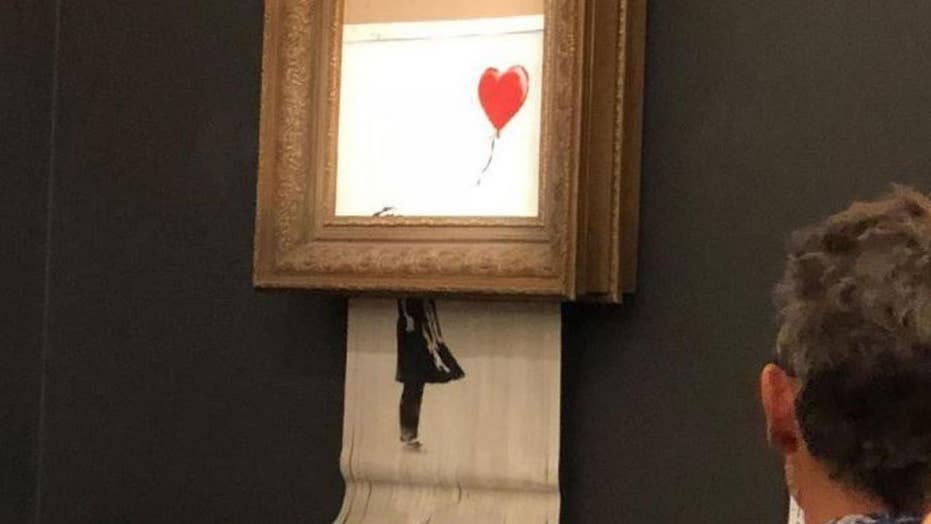 A Banksy stencil spray painting triples its auction estimate and becomes a record for the elusive artists. However, seconds after it was officially sold, the piece runs through a shredder hidden in the frame.

The elusive street artist Banksy is honoring health workers fighting the coronavirus pandemic with new work at a British hospital.

The framed picture, titled “Game Changer,” depicts a young boy sitting on the floor playing with a nurse superhero toy. Batman and Spiderman action figure toys lie in a wastepaper basket next to the boy.

The nurse figure, complete with a cape and a face mask, wears an apron featuring a red cross — the only spot of color in the black-and-white work.

The piece has been placed on display in a corridor at Southampton General Hospital in southern England Wednesday.

Health officials said it was a “massive boost to morale” for everyone at the hospital, which has seen at least two members of staff die after contracting the new coronavirus.

"Our hospital family has been directly impacted with the tragic loss of much loved and respected members of staff and friends,” said Paula Head, chief executive of University Hospital Southampton NHS Foundation Trust. "The fact that Banksy has chosen us to recognize the outstanding contribution everyone in and with the NHS is making, in unprecedented times, is a huge honor."

She added: "It will be really valued by everyone in the hospital, as people get a moment in their busy lives to pause, reflect and appreciate this piece of art. It will no doubt also be a massive boost to morale for everyone who works and is cared for at our hospital."

The artist left a note for hospital workers, saying: “Thanks for all you’re doing. I hope this brightens the place up a bit, even if [it’s] only black and white.”

The artwork will be auctioned later to raise money for national health charities, a spokeswoman for Banksy said. 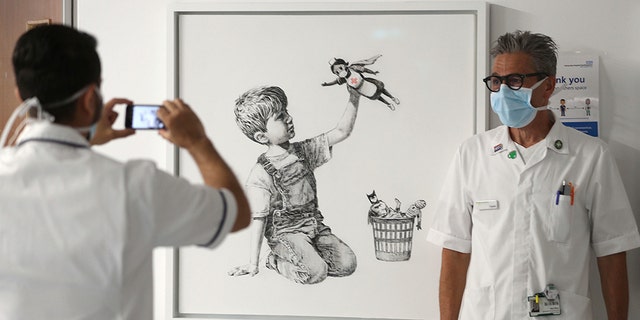 A member of staff has their photograph taken in front of the new artwork painted by Banksy during lockdown, entitled 'Game Changer', which has gone on display to staff and patients on Level C of Southampton General Hospital in Southampton, England, Thursday, May 7, 2020. (Andrew Matthews/PA via AP)

The virus has wreaked havoc on the country as the British government looks to reopen the economy.

The Bank of England projected that Britain’s economy will shrink by 14 percent this year, its biggest decline since 1706, when Europe was locked in the War of the Spanish Succession.

In Britain, where the official death toll stands at more than 30,000, second only to the United States, Prime Minister Boris Johnson was expected to extend a more than six-week lockdown on Thursday but hopes to ease some restrictions on economic and social activity starting next week.

Johnson said the government will act with “maximum caution” to prevent a second wave of infections.

Worldwide, the virus has infected more than 3.6 million people and killed over a quarter million, according to a Johns Hopkins University tally, which experts agree understates the dimensions of the pandemic because of limited testing, differences in counting the dead and concealment by some governments.