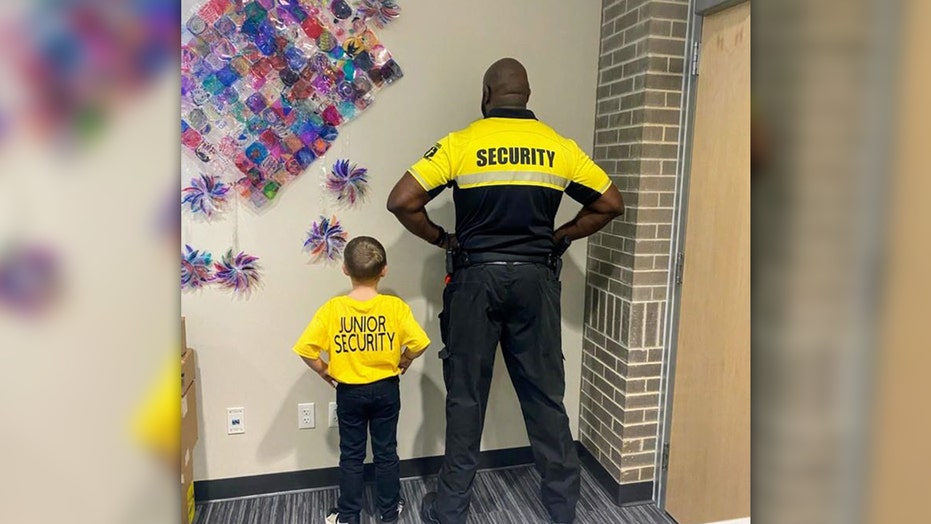 A 5-year-old boy from Jacksonville, Ark., chose to honor his school security guard during "Dress as your favorite person day" Wednesday and wore an almost identical outfit to pay homage to the man who keeps the students safe.

Cross works as a security officer at Bobby G. Lester Elementary School and was someone Easton looked up to from the start.

"From day one, he has always had a fascination with Officer Cross," Easton's mother Lauryn told WXIA.

Lauryn made Easton his own shirt which read "junior security" so he could emulate his hero and show his appreciation.

"That shirt is probably going to stick with him forever. It means a lot to him," she added.

Cross said he values his relationship with the students and tells them he's there to protect the school from bad people.

"It makes me appreciate my job more," he said. "They had questions about why I was armed and I was just telling them, 'I'm armed to protect them from someone bad who would come and hurt them.'"

Easton took what Cross said to heart, and never misses a chance to remind his mother that he's in good hands.

"He tells me every day; 'Officer Cross keeps us safe from the bad guys, mommy,'" she said. "It's reassuring. … The love that that child has for him is overwhelming."

Cross added that seeing Easton's enthusiasm and receiving a daily hug from him are some of the main highlights of his day.

“Just for the fact that he shows his appreciation and he hugs me every day when he sees me every morning. It really makes my day," he said.

This is reportedly the first year the school is having armed officers patrol the grounds in the Jacksonville North Pulaski School District. It is also the first district in the state to have an officer in every school.

Meet the Nun Who Wants You to Remember You Will Die