A controversial new bill has been proposed in Arizona. If passed HB 2706 would ban transgender girls from competing on school sports teams. It’s something several states are currently debating as well.

Arizona House Republicans passed a controversial bill that would ban biological males who identify as transgender females from participating in women's sports.

Supporters say the "Save Women's Sports Act" is intended to prevent young girls and women in K-12 schools, community colleges, and state universities from being forced to compete against biological males, but opponents argue it allows for discrimination. House Bill 2706 passed along party lines 31-29 and is headed to the state Senate, FOX 10 reports. The bill is strongly opposed by Democrats.

"Males should participate with males and compete against males, and females should compete against females," Rep. Nancy Barto, a Phoenix Republican who sponsored the bill, told Fox News. "Recent research actually verifies that even with cross-sex hormones, men have an unequivocal advantage. They've got stronger bones, they've got greater lung capacity."

She argued the bill is necessary, citing a sex discrimination lawsuit in Connecticut brought by the conservative group Alliance Defending Freedom and students who argued they had unfairly lost while competing with transgender athletes. 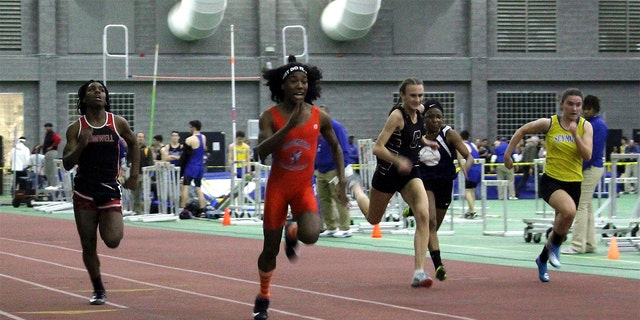 "Girls deserve to compete on a level playing field. Forcing them to compete against boys isn’t fair, shatters their dreams, and destroys their athletic opportunities,” Alliance Defending Freedom attorney Christiana Holcomb said in a statement. “Having separate boys’ and girls’ sports has always been based on biological differences, not what people believe about their gender, because those differences matter for fair competition. And forcing girls to be spectators in their own sports is completely at odds with Title IX, a federal law designed to create equal opportunities for women in education and athletics.”

As in Connecticut, the Arizona Interscholastic Association, which governs school athletics, allows athletes to play on teams consistent with their gender identity, regardless of their biological gender.

Democratic Rep. Isela Blanc called the bill "completely inappropriate" and the Arizona Democrats dubbed it the "Show me your genitals" bill because of now-deleted parts that would've required a physical exam. Barto amended the bill to require a genetic test.

“I mean, if they want to debate genitals, I guess we’ll see,” Blanc said. “We’re talking about kids in sports that range in athletic ability, height, weight, age. And it’s all to go after transgender girls. It makes no sense. It’s completely wrong, inhumane, unkind, inappropriate and just mean-spirited."

The ACLU of Arizona is fighting the bill.

Republican Gov. Doug Ducey did not say whether he would sign the bill if it passes the Senate.

Washington county recommends all 2.2M residents to work from home, tells over 60’s to stay indoors

Schools Are Open, but Many Families Remain Hesitant to Return

‘Will I Recognize You?’ She Traveled 2,500 Miles to Reach Her Mother.

4 Dead in Shooting and Fire Near Baltimore, Police Say

‘You’ve Lost Your Sparkle’: What to Do When Burnout Hits

Washington county recommends all 2.2M residents to work from home, tells over 60's to stay indoors