Ahead of Super Tuesday, Democrats bear down on Texas

Ahead of Super Tuesday, Democrats bear down on TexascloseVideo

Democratic candidates bearing down on Texas ahead of Super Tuesday

AUSTIN, Texas — Many of the Democrats seeking to unseat President Trump are making stops in Texas ahead of the all-important Super Tuesday, as the Texas Democratic Party released polling data showing early voting numbers in the Lone Star State rising well above those for the last presidential election cycle in 2016.

“Presidential candidates have been visiting here and they are investing in Texas,” Rahman said. “Really, what it shows you is that Texas is the biggest battleground state in the country.”

The Texas Democratic Party attributed the uptick in voting to a dislike for Trump, with the party saying he’s “uniquely unpopular in the state of Texas” because of border and immigration issues.

“He wants to take away land from Texans to build a border wall and Texans don’t like that,” Rahman said. “The other thing is a change in demographics. In Texas, we have added 2.6 million new people to the voting roll since 2016. Of those, 1.6 million are under the age of 35 and 38 percent are under the age of 25, meaning this will be their first time voting, so it is going to be completely different.”

The Lone Star State is one of 14 casting votes Tuesday and with the second most delegates in the nation up for grabs, it’s a hot spot for candidates. 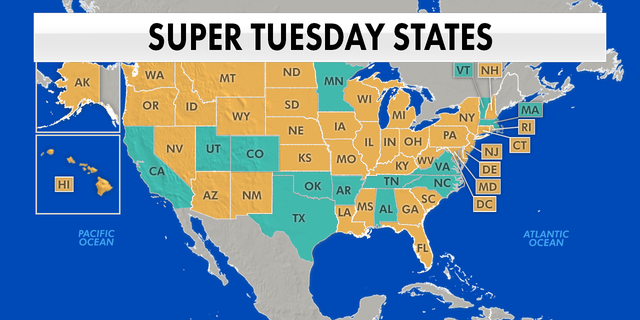 Texas is one of 14 states holding primaries on Super Tuesday.

“Texas has a lot of delegates and so they are going to spend a lot of time trying to reach into Texas. And, because there is no clear frontrunner or one dominant figure, everybody thinks they have a chance,” University of Texas Associate Professor of Government Eric McDaniel said.

McDaniel added that the efforts from Democrats stemmed from discussions about being able to “turn Texas blue or at least purple.”

“With the growing size of the state and the changing demographics of the state, there is belief that the Democratic Party is pretty strong,” McDaniel said.

However, the professor added, “Size matters. If you are able to secure Texas, it can help you moving into the national convention.”

Between Bernie Sanders, Mike Bloomberg, Elizabeth Warren and Joe Biden, the Democrats have had more than 30 campaign offices across the state. Bloomberg was leading the ground efforts with 19 offices across Texas. 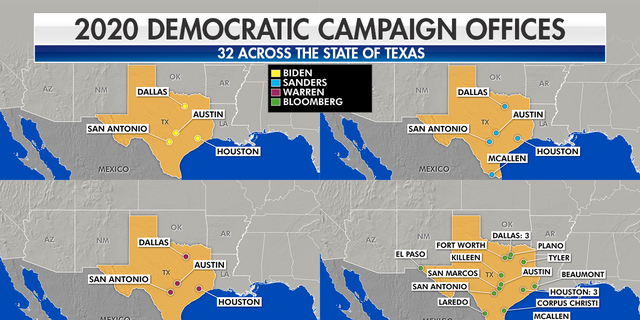 Democrats have been operating more than 30 campaign offices in Texas ahead of Super Tuesday.

“Bloomberg has made Texas his Iowa in the sense that he needs to place well in the state in order to continue, but we have been investment from every other presidential candidate and we continue to see it,” Rahman said. Iowa held the first-in-the-nation caucuses last month.

However, those efforts may be in vain considering recent polls showed Bernie Sanders leading Texas by nine percent over his nearest competitor, which McDaniel said may “set the tone” for the rest of the election season. 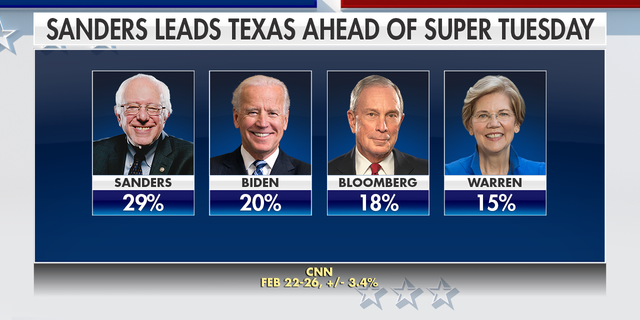 “By being able to come out as the winner on Super Tuesday… you are able to get people to donate more because people will support a winner,” McDaniel said. “I think going forward what you will see is, if Sanders wins, he will be the one dictating the conversation.”

“For a lot of people, this is their last gasp that if they are not successful on Super Tuesday, they are going to pack up shop,” McDaniel said.

Candidates have continued to visit the state ahead of Super Tuesday, hoping to win the state and continue on to win the nomination.

“You look at Texas and not only is there a lot of delegates, but it is also the second-most-diverse state in the country which is reflective of the Democratic Party,” Rahman said. “Texas is on the radar of everybody and it is a top-tier priority for Democrats.”

As of now, no Democrats are scheduled to be in Texas on Super Tuesday, but state party officials said they haven’t completely ruled it out.