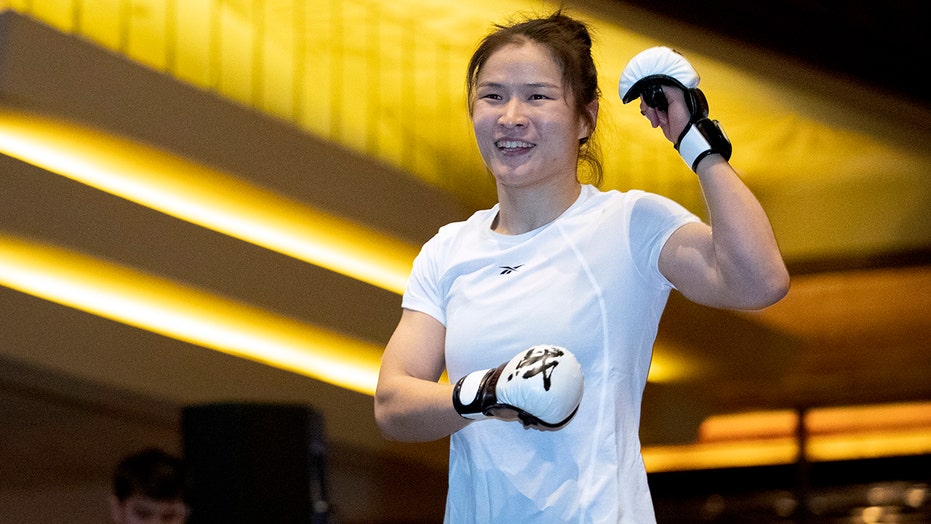 Israel Adesanya sat down in a crowded room at the UFC's Las Vegas training center and greeted the crowd in English and Mandarin. He apologized for his relative lack of proficiency in the second language, which he learned during his kickboxing career in China.

“If I'd had a Chinese girlfriend back then, maybe I'd be fluent,” Adesanya said with a grin. “But if you don't use it, you lose it.”

The Nigeria-born, New Zealand-raised UFC middleweight champion has never lost in the cage. He is also a charismatic, multilingual citizen of the world who appears to be the next fighter in line for superstardom with the UFC, which would love to capitalize on his potential for global appeal.

Yet Adesanya (18-0, 14 KOs) knows his aspirations hang in the balance on every fight. He intends to stay on course when he takes on fearsome Brazilian veteran Yoel Romero (13-4) on Saturday night in the main event of UFC 248 in his first defense of an undisputed title belt.

“A lot is on the line in this fight,” Adesanya said. “I don't know what the odds are, but I feel like the underdog. I feel like a lot of people want to see me fall in this fight. This is the nature of what we've created. We like to build people up, and we like to tear them down because we see inadequacy in ourselves from the way they're shining.”

Adesanya actually is a solid favorite in the main event of the UFC's latest pay-per-view show at T-Mobile Arena. The penultimate bout also has global appeal, with new Chinese strawweight champion Zhang Weili defending her belt against former champion Joanna Jedrzejczyk of Poland.

Although Adesanya is telling himself that he's the underdog, most everyone else is expecting an impressive performance from the champion who has taken over the UFC division long dominated by Anderson Silva. Adesanya won his title with a knockout of Robert Whittaker last October, establishing himself as the world's top 185-pounder — and picking up all the distractions and challenges that come along with the distinction.

Adesanya speaks about the downside of success just as openly as he discusses his plans to thrash Romero.

“The leeches are everywhere,” Adesanya said. "The snakes, the vultures. They usually circle around dead, deceased creatures, but I'm thriving. I'm living. I've tightened my circle. There's definitely been a lot of people I've cut off as recently as this week. It's unfortunate, because not all your homies can grow with you."

Romero turns 43 years old next month, and the famously musclebound fighter has lost three of his last four bouts by decision. This matchup is his first chance to fight for an undisputed UFC title belt.

Zhang (20-1, 10 KOs) and Adesanya both burst onto the UFC scene in 2018 after years of toil in smaller promotions. Their talents became undeniable, and both capitalized on their first title shots with victories that boosted the promotion's visibility outside North America.

Zhang became the first Chinese champion in UFC history last August with her impressive stoppage of Jessica Andrade. Her first defense is a difficult matchup with Jedrzejczyk, who held the strawweight title from March 2015 to November 2017, when Rose Namajunas dramatically stopped the previously unbeaten champion.

Jedrzejczyk lost three of four fights, including a failed flyweight title shot against Valentina Shevchenko, in a rough 13-month span that she attributed to trouble in her personal life. She claims to be refocused and determined to recapture her belt, and she has been notably confrontational in her promotion of this fight with Zhang.

Jedrzejczyk also got in trouble with the UFC and insulted Zhang when she posted a meme on social media linking the Chinese champion to coronavirus.

“I put a lot of pressure on myself, but I like it,” Jedrzejczyk said. “This is how I motivate myself. Soon I'm going to retire. I made my money. Stepping in there and fighting for the title, I feel like a winner already.”