The Shiv Sena leader and son of Maharashtra Chief Minister issued a statement in Marathi on Tuesday, rubbishing reports and theories that have been doing the round on social media linking him to actor Sushant Singh Rajput.

Calling the allegations against him as 'baseless', the minister said he is unnecessarily being targeted by opposition parties. He said if anyone has evidence of any charges, then it should be handed over to Maharashtra Police as they are investigating the matter. 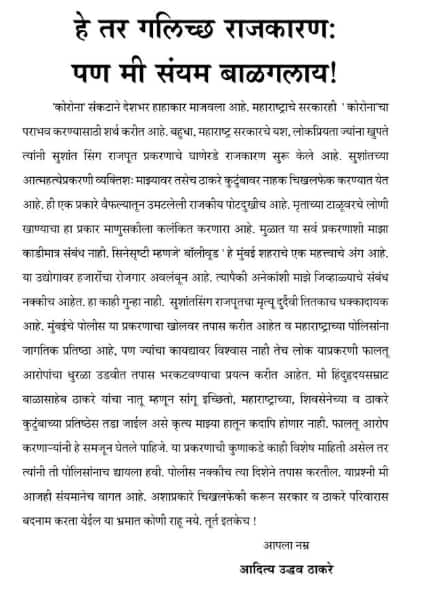 He took a potshot at the opposition saying this was coming as political despair since 'some could not digest the success of efforts put in by the ruling Maharashtra government in bringing the CVOID-19 pandemic under control.'

He also admitted that he shares a good bond with many Bollywood celebrities, which he pointed out, is not a crime.

He said the opposition party is doing very low-level politics and the Thackeray family won't stay quite on it.