A wildlife control company based in Powhatan, Va., near Richmond, removed an 8-foot-long beehive from the ceiling of an apartment after neighbors complained about bees accessing an unoccupied apartment through the air conditioning ducts, a report said.
SWARM OF NEARLY 40,000 BEES IN CALIFORNIA SEND 5 TO HOSPITAL

The beehive was hidden in the ceiling over the living room, according to Virginia Wildlife Management and Control, McClatchy News reported.

The beehive, capable of supporting between 100,000 and 150,000 bees, was “not fully occupied” when the discovery was made, company owner Rich Perry told the news service.

“This thing was humongous and it was inside the building, which is extremely unusual. We’ve dealt with hives before on the outsides of homes, in outside walls, but never inside the ceiling.”

“This thing was humongous and it was inside the building, which is extremely unusual,” he said. “We’ve dealt with hives before on the outsides of homes, in outside walls, but never inside the ceiling.”

No location of the apartment was revealed, but officials said it was between tenants at the time — a possible reason why no one heard thousands of bees buzzing in the walls.

The property owner unsuccessfully attempted to remove the bees last summer, however, Perry estimates the hive of Italian bees was at least 2 years old.

“They called me up a few days ago and said: ‘There are bees still coming out through the ductwork,” Perry told McClatchy News. “We used saws to cut a 6-foot opening the ceiling, and we kept having to make the hole bigger. The hive just kept going and going.”

He believes the bees accessed the wall to get into the ceiling through holes in the exterior siding and found a home between rafters and sheetrock, the report said. 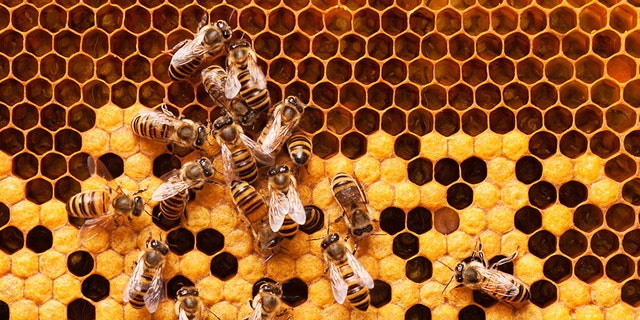 A wildlife control company in Richmond, Va. removed a massive 8-foot-long beehive from the ceiling of an apartment after concerned neighbors complained about bees accessing an abandoned apartment through the air conditioning ducts. (iStock)

Virginia Wildlife Management and Control has a “no kill” policy with bee hives, he said, adding great effort was taken to find the queen. His hope was to move her and her entourage to a new location.
CLICK HERE FOR THE FOX NEWS APP

Perry explained to McClatchy News he tried to save as much of the honey as possible, but only 15 to 20 pounds were edible.